Who’d be a weatherman? 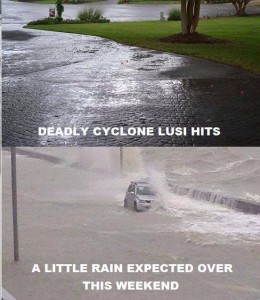 The life of a meteorologist cannot be a happy one. They are charged with predicting the virtually unpredictable using a combination of maths, historical and current data, scientific modelling, logical suppositions, blind hope and a degree of psychology, all of this to estimate what the weather may or may not do over short time frames and how that might affect the lives of their consumers, the great unwashed out there in proletariat land like you and I. When they are right, they aren’t thanked; when they predict Armageddon and deliver a border clash between the parish of St Michaels and the parish of St Andrews instead, they are ridiculed; and when they predict poor weather deliver a bad day in Syria, they are vilified. Such has been their lot in our little corner of the world in the last two weeks where they firstly warned of catastrophic consequences with the impending arrival of a category 4 cyclone (Lusi) that instead delivered the equivalent of a spring day in Tennessee and then two weeks later predicted “poor” weather leading into Easter as a result of (very) ex cyclone Ita and instead gave us the apocalypse. The reaction of most is summed up beautifully by the graphic currently doing the rounds on social media. The act of omission – not predicting a malevolent event accurately enough – is raising heckles far more than the act of commission – predicting a disaster that didn’t happen.

So what, you may well ask. Unfortunately for those of us involved in finance, forecasting is not restricted to the weather and those of us that advise on portfolios are caught in the same cleft stick as the weathermen – we use very similar variables to look at what may happen in the short term to determine how that may affect the performance of portfolios and whether we need to alter the makeup of those portfolios to either take advantage of those conditions or – conversely – to avoid downsides of those conditions. If one is predicting a potential adverse event and suggests changes to portfolios as a result, this usually entails taking risk off the table and this potentially acts as a drag on portfolio returns until such a time as the dread event occurs, if indeed it does. Impatient investors often rebel against such positioning if the dread event doesn’t arrive on schedule and the forecaster is then on the receiving end. If it does arrive and appropriate positioning has taken place, that is “all part of the job.” However, if one fails to forecast a malevolent event (like 2008) the reaction is brutal.

Just like the weatherman, it is my view that it is better to always warn when worried and always carry insurance against the unlikely but potentially catastrophic events that haunt the investment world and wear the ridicule when such events don’t arrive on schedule: at the end of the day it is much better for everybody if 10 out of 5 catastrophes have been predicted and catered for rather than 3 out of 5.