On of the biggest threats to investors’ wealth is succumbing to our most ancient instincts when making investment decisions. We are seeing signs of that behaviour today as US markets climb ever higher despite little – if any – financial reasons for this to be the case. There are warning signs, however, that this is leading to complacency which in turn will potentially lead to another investment bubble. Apropos of this is a headline that may be of interest for believers & non-believers of this Pollyanna world alike: Corporate yields are only 125 basis points higher than Treasuries. It’s the smallest spread since 2007. Hmmm. Now I concede that 2007 is a very, very long time ago but those with good memories should recall 2008 (only a very long time ago & a few months after the last outbreak of Nirvana) & that that particular time actually didn’t go so well for us. The desire for believing in miracles is a very ingrained trait & is very self-fulfilling until the day that it is not – just ask all those people you know who were investors in finance companies: there was zero volatility in returns until the day there were no returns of any description, income, capital, anything. Personally I don’t believe that we are on the precipice of another GFC-like event but I also don’t believe that markets are the one way bet that the current euphoria suggests & that the “all in” unhedged mentality of many investors is justified. One look at a 25 year history of the VIX shows us that periods of benign volatility (i.e. lack of fear) have always been followed by prolonged periods of pronounced vol (i.e. extreme fear): 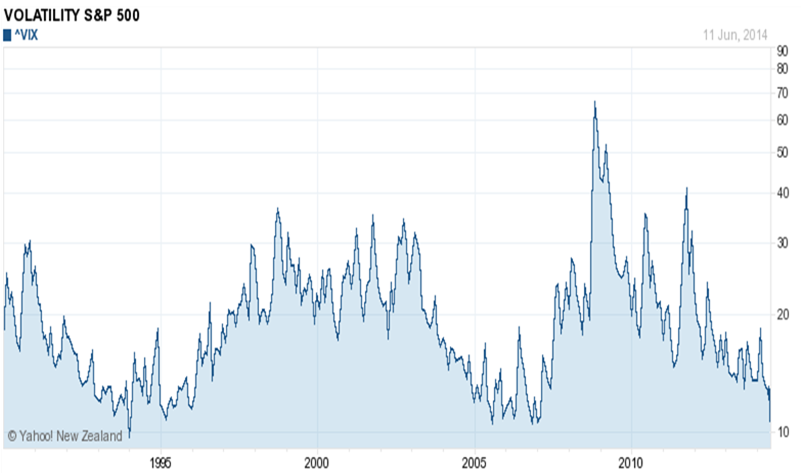 & with extreme fear we get the end-of-times shocks to markets. Now look where we are now compared to previous low vol events: right down at levels of 11 & below & not seen since the halcyon days of ’07, a date you may have seen earlier in this paragraph of plentiful punctuation. & the quid pro quo of no fear? No prizes for guessing right here:

You can’t get past 100…. All it takes is some upsets in the Great Sandpit of Arabia to break up the seemingly endless series of new highs (US stocks fluctuated near recent highs eking out another small gain at the close- 7th record close in 8 days mumbled the headline on Tuesday morning & then did it again on Tuesday night) with a thud (U.S. stocks step back from record highs said the headlines yesterday before a larger drop last night). The issue is that we don’t live in Utopia & there are always the potentials for Black Swans. Even well-known Harbinger-of-Doom Daniel Roubini – himself a relative bull these days – when asked about potential threats outlined six, but none of them included the Middle East where the excitement currently resides. The biggest threats are always those we aren’t looking for; that’s why they’re called Black Swans.