Extract from The Clearance Newsletter 11.9.14

THE MARKETS Those of a non NZ persuasion probably don’t care but milk is now worth less than not only gold (which is worth nothing) but also the grass used to manufacture said pale fatty elixir of (probably) not the gods but (almost certainly) of the dogs. Last week’s global auction saw prices fall to 6 year lows in both USD & NZD terms. Worse, volumes were high, forward contracts are worse, & the Chinese have more inventory than they have ever had & vindictive Vlad has banned food imports from bad countries like us while NZ warehouses are at capacity & can’t store the stuff. Worse, First NZ Capital interpolate from this that current spot prices imply a $4.00 payout according to our modelling which would be lower than the cost of production & 1/3rd below the current $6/kg prediction. (They are the outliers, however: most have the payout at ~ $5 but that is using assumptions that don’t look bullet proof at present). & there’s still more! Before this auction we saw New Zealand’s ANZ commodity prices fell 3.3% in August to a 17 month low, its sixth consecutive monthly fall. Remember the comment in the 25 August issue of The Clearance that our rock star status was dependent on 3 pillars, all of which reach their peak next year before tailing off? This is the fourth, supposedly more permanent, pillar & already looks to be gone before we peak with the other three next year. Moo.

THE ECONOMY Demographics are important for economies; in the West we worry about what we will do about the aging boom & that is important. The aging of the West is probably not, however, the leading demographic issue we face at present; it is good old fecundity. The below helps explain why the dominant EM player in the next generation will more likely be India than China: 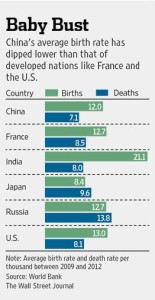 In fact, China’s expansion will be limited by its increasingly “top-heavy” population pyramid – with a birth rate lower than countries like France, Russia and the US let alone India, Nigeria, & other frontier world countries. An aging population is much less of an issue if you are producing increasing numbers of potential taxpayers.