Economic and Investing in The Big Apple

One of the most important components of portfolio management is understanding what drives investment markets and this means trying to understand the economic and political landscapes: the 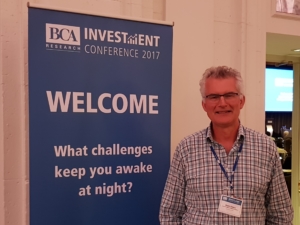 markets are, after all, simply are a derivative of “The Real World”.  To aid our understanding at Cleary Wealth Management, we read and listen to a lot of commentary but our “go to” source of political and economic commentary is BCA – the Bank Credit Analyst.  We subscribe to both their global asset allocation and global economic services and this year attended their global conference in New York for the first time.  The aim was to listen to insights from a collection of outside experts as well as their own internal people. Debate, at the end of the day, helps shape your own views while rubbing shoulders with investors from Saudi Arabia, South Africa, and Sweden, as well as the more usual Asian and “white Pacific” groups I encounter, adds to the pot pourri of idea flow. 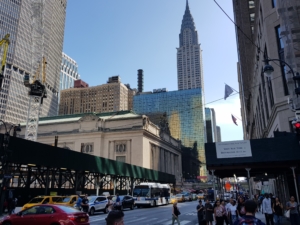 There were many different sessions covering this year’s theme (Shifting Regimes and Turbulent Markets) ranging from “Assessing The Trump Administration’s First 250 Days” featuring Corey Lewandowski (Trump’s erstwhile campaign manager) on the one hand and Stephanie Cutter (Obama’s deputy campaign manager in 2012) on the other, thru to “The Outlook for Fixed Income and Currencies”.  The highlights for me, however, were the three keynote speakers and a session on AI, Robotics, and  Quantum Computing (“The Investment Implications of New Technological Innovations” which was in fact an absolute data dump on these new technologies by Neil Jacobstein from Singularity University on the first two and Dario Gil from IBM on the latter. This was one of the most confrontationally positive presentations I have ever seen.

The key notes included Daniel Kahneman (Nobel Prize winner, creator of behavioural finance – the basis of my practice – and author of Thinking, Fast and Slow) and Niall Ferguson (prolific author, Senior Fellow of institutions at both Harvard and Stanford Universities, and arguably the finest historian of the global economy in the world today). Listening to massive brains expounding on their pet subjects is not only educational but also a rare pleasure.

So, what were the takeaways? Essentially, there was unanimous agreement that politics around the world have become more populist and that this is likely to have consequences for both investors and the population at large that are difficult to predict with any confidence. On a purely economic front, the biggest issue for the world is that investors have been “pushed out” along the risk curve as they seek any yield in a zero/negative interest rate world. The prevalence of 2,3, and even 5 times levered investments has become mainstream over the last 5 years and while there will always be product to buy as markets rise, selling in a falling market with exponential levels of debt may prove to be far from easy, to say the least. These were the key takeaways from my point of view and reinforced our current portfolio positioning which – while far from defensive – is very wary: we acknowledge that the “animal spirits” that drive markets potentially have a very dark side and being patient can bring its own rewards.

On a more micro level, we heard that:

All in all, a very worthwhile conference in the world’s city; I look forward to going into more detail with those that are interested.  Grant@cleary.co.nz